18% of Github Projects Have CI

In this post, I’ll share my analysis of the adoption of continuous integration (CI) in public Github repositories, based on usage of the following CI vendors:

I’m the first to admit that this is not a comprehensive list of CI vendors.

It’s also obvious that using a CI vendor for executing your builds is not a requirement for having CI.

That being said, we can dig into public data provided by Github to get a lower-bound estimate.

Github has provided a public dataset of code that can be queried via Google’s BigQuery database service.

I followed Google’s “Codelab” for querying this dataset using SQL, running a basic query to identify repositories in their test dataset.

In order to identify whether a repository uses a given CI vendor we must assemble a list of rules for identifying repositories that are configured for specific CI vendors.

For example, in modern versions of Jenkins it’s encouraged to include a Jenkinsfile in the project root of your repository.

If this file is present then Jenkins will process its contents as a manifest for how to build your software.

This type of file-based configuration is not exclusive to Jenkins, and it allows us to count repositories that are using file-based manifests for configuring CI.

Here is a list of rules for detecting if a repository is configured for CI with the given vendor:

Here is the SQL query I used to get a count of repositories that had each of these files:

That’s a grand total of 18.1% of repositories in this dataset having been setup with any CI vendor at all.

The market seems to be dominated by TravisCI, having a .travis.yml file present in 16.9% of repos.

Here are some data visualizations to help illustrate the results: 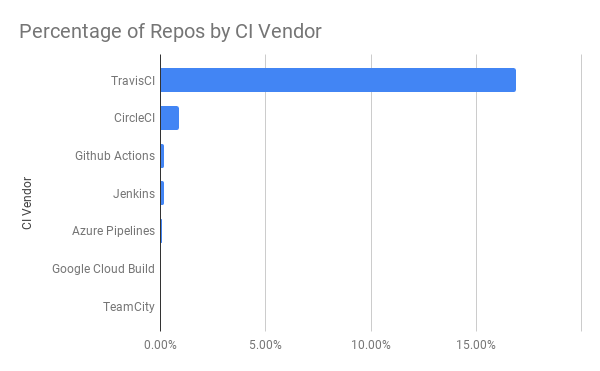 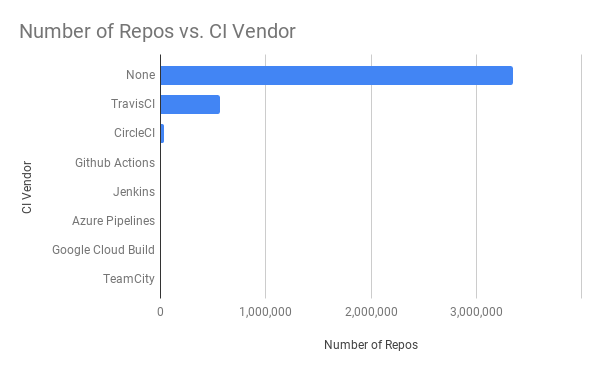 With only 18% adoption, that leaves 82% of these public repositories not using popular CI vendors.

This is a huge opportunity to make CI a default and easier to adopt.

One area I am most curious about is automatically profiling a software’s CI runtimes and factors that introduce flakiness to the build.

These two characteristics of software reflect:

Please do email me with comments/suggestions, etc. at max.mautner@gmail.com