How I Got My Jobs

This isn’t meant to be a comprehensive diary of my job-seeking. My personal career journey is not generalizable to everyone’s situation, and I’m limiting my sharing to job offers I ultimately received and accepted.

My first job after college I joined a financial trading firm in Chicago, landing my interview (& ultimately the job offer) from the college career center at Harvey Mudd College.

While I’m grateful for the opportunity I had in that first job to learn about finance and the business world it ultimately was horrible for my mental health & I felt relief quitting that job for a several month period of unemployment.

As I was unemployed, I considered going back to school for a graduate degree in computer science (to reorient me to a career in software engineering).

After talking with a friend from college who encouraged me to come join the startup he worked at, I re-evaluated the economics of graduate school. Grad school was over $100,000 in opportunity cost (paying for tuition & housing while losing out on salary).

Why would I pay to learn software engineering when I could get paid to do it?

Despite being cold-shouldered after an initial “phone screen” I made an effort to reduce the friction it might take to interview me by telling the in-house recruiter that I would be passing through town if they wanted to meet: 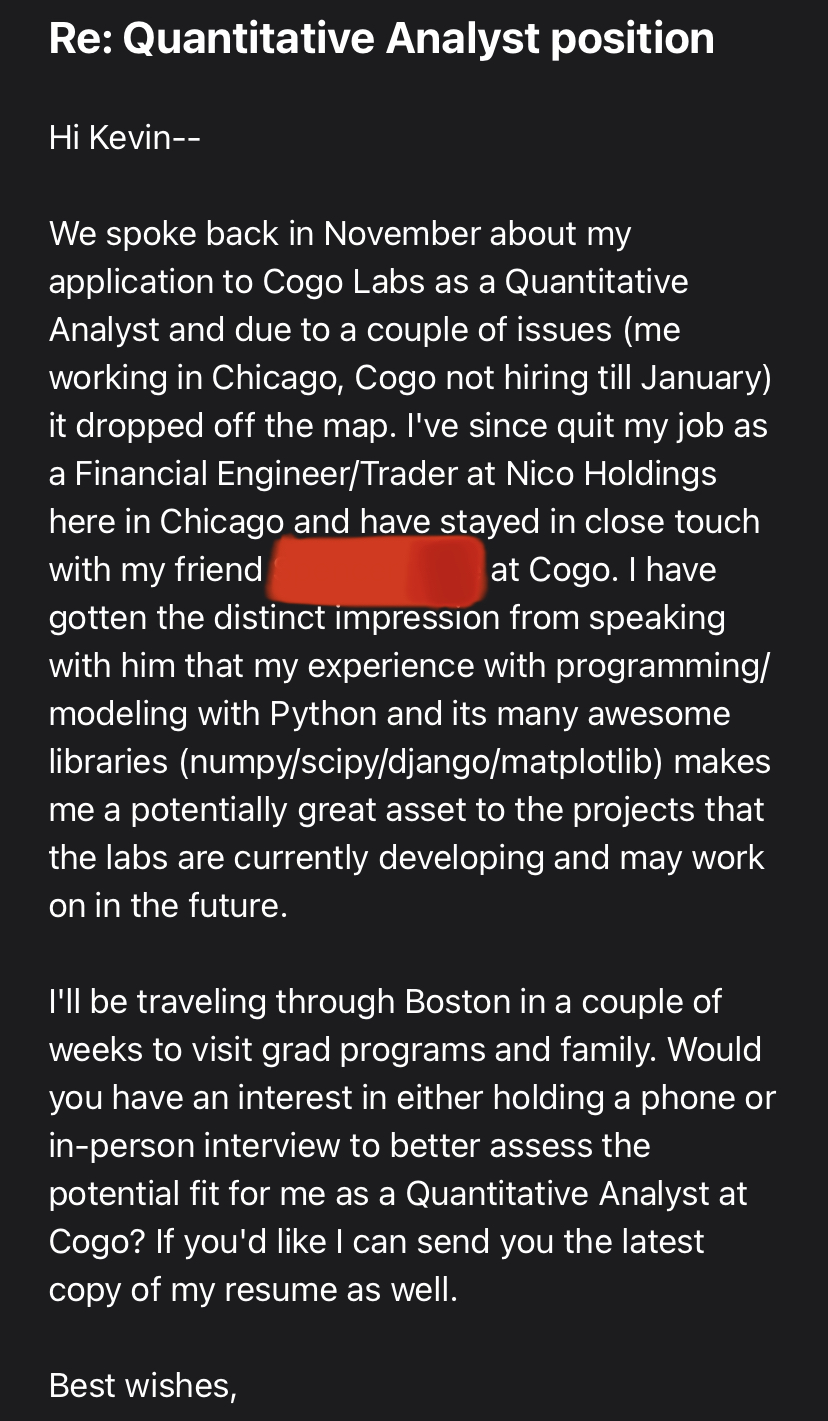 A few hours later I was somewhat surprised to receive a reply:

We set up a time to do an on-site interview, and I ultimately got the job (after some awful negotiation on my part).

The 3rd job was a segway from the 2nd–a transfer from one company to its sister company.

The way that went down was very, very weird and I won’t delve into the details because it’s not generalizable/a great learning experience.

What I will say is that non-compete agreements are really fucked up and I am glad to live in California where these contracts are not upheld in court.

I was ready to move home from Massachusetts to California, and reached out to an in-house recruiter at a startup in Berkeley: 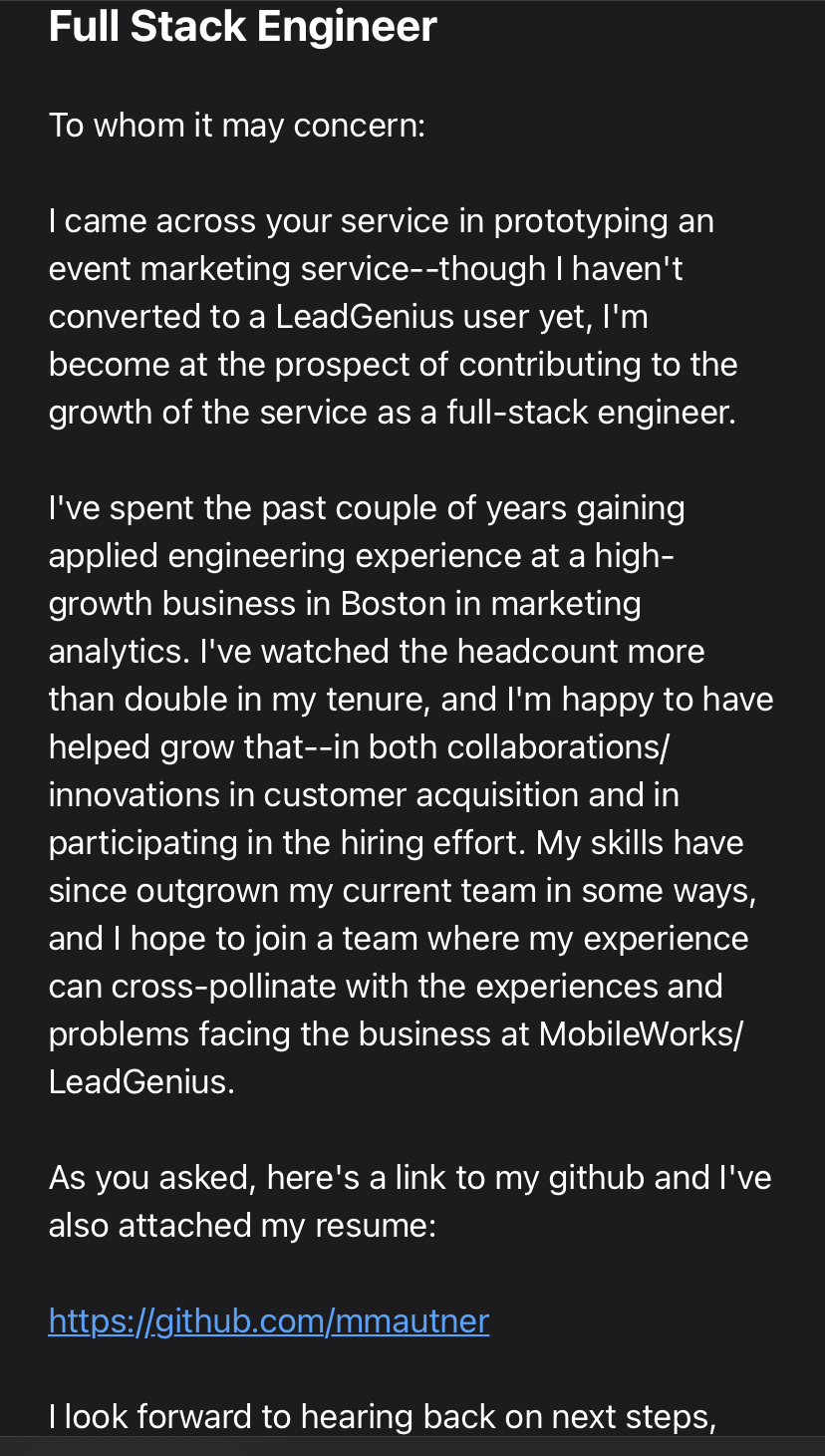 I would probably write this email differently if I were writing it today, but hey, it worked! I received this reply 4 days later: 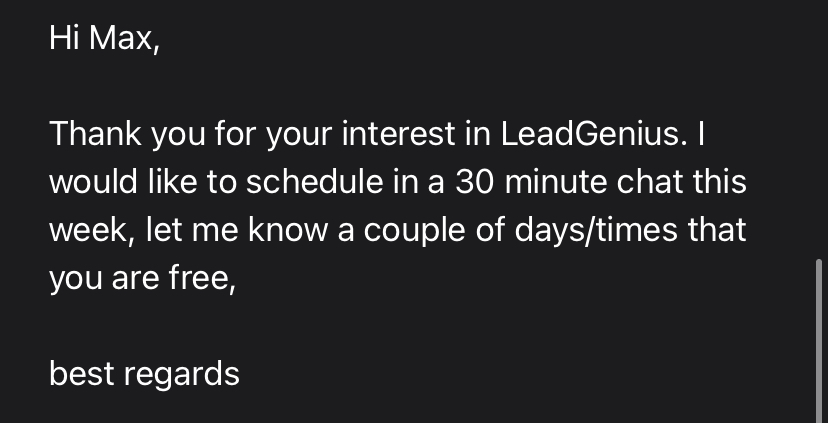 I stayed at LeadGenius through them raising a Series B round of funding ($14M?), and wanted a change of pace. I’d literally driven by a company on my way to the gym & looked them up online & on AngelList where they had a job listing with an advertised salary range that was more than I currently earned.

So naturally I reached out by cold email + AngelList: 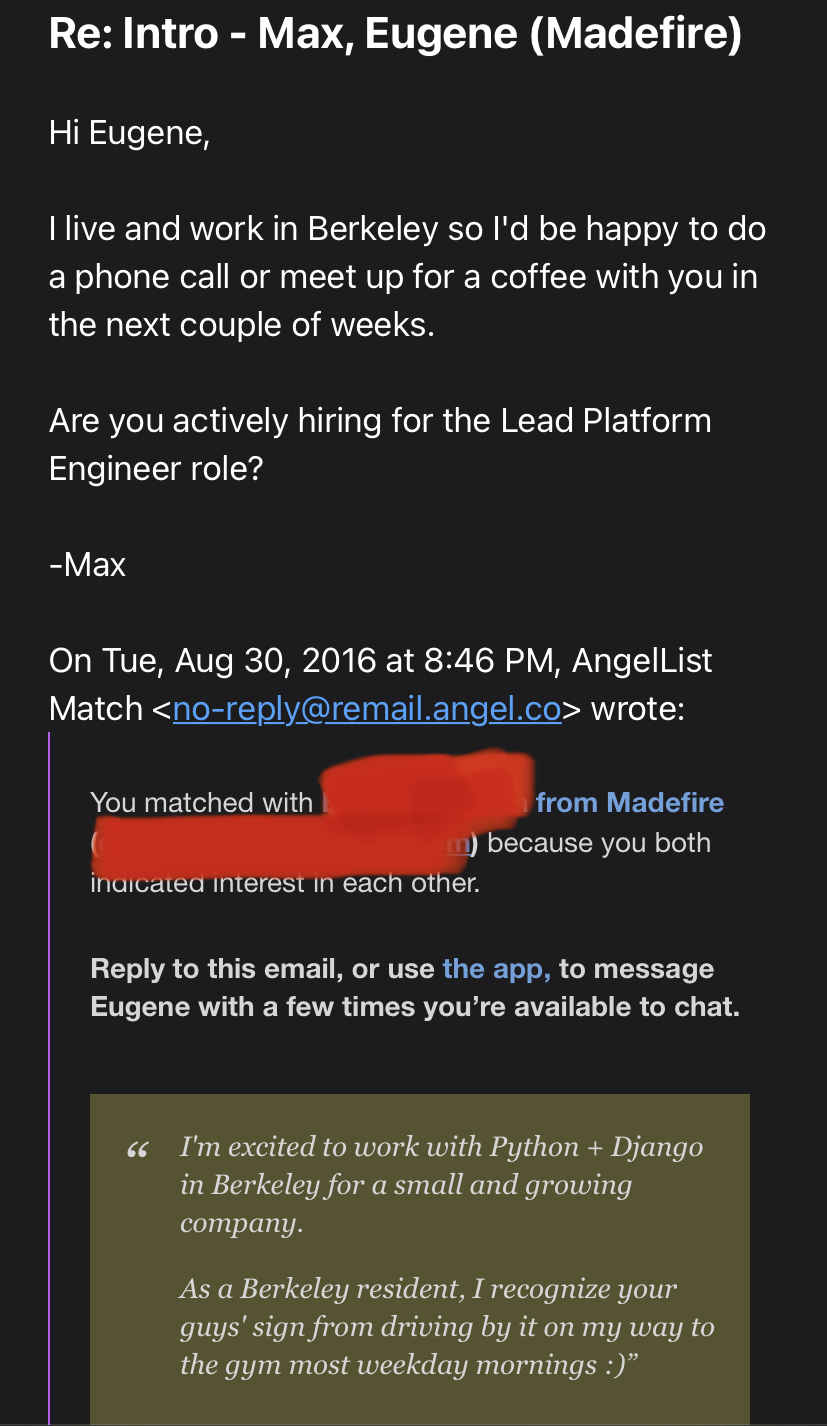 Within 8 minutes I received this email reply: 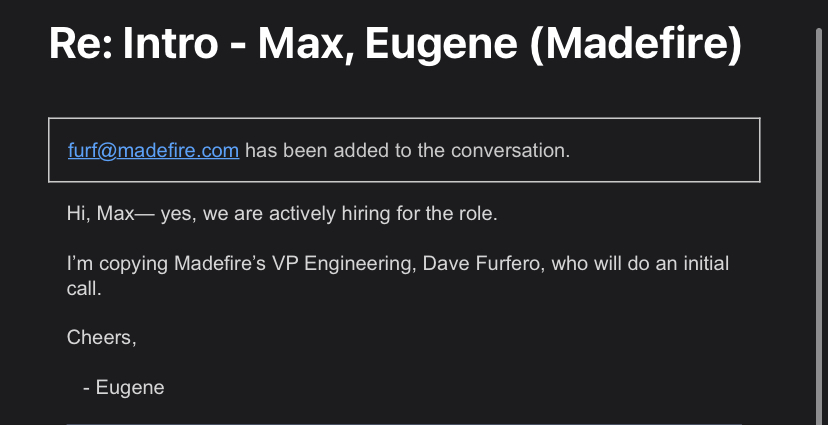 Bada bing bada boom–some more interviewing later & I had moved on to my fifth job.

I moved across the SF bay from Berkeley to San Mateo to move-in with my girlfriend and improve her commute.

This led me to job search for a shorter commute and a new work experience–I looked around at employers nearby and I realized a personal finance app I used was a 5-minute drive from home.

Naturally, I reached out to the head of engineering via cold email (I guessed his email address): 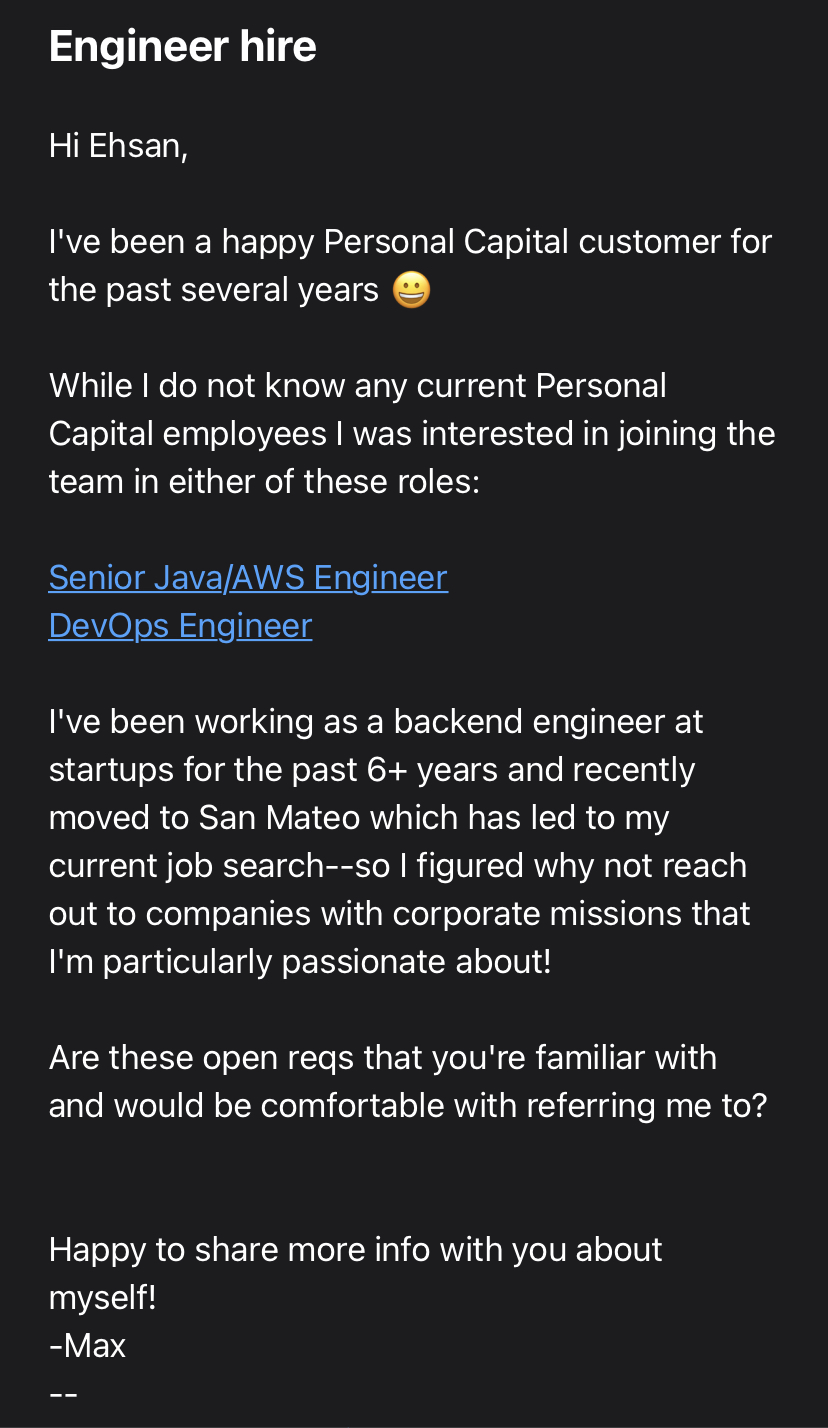 Within 3 minutes I received this reply:

That brings us to my 7th job, which is my current role.

I won’t dwell on it because I think it’s the least interesting one.

I will say that throughout, reaching out directly to a human being has been the key to my job searches.

After all human beings are the ones making the decision to hire you: exchanging their business’s financial capital for your human capital.

If you want any help or have questions about how to do this kind of a job search my inbox is open & I’ll try to help you: max.mautner@gmail.com