I started lifting weights at ~23 years old after the internet pointed me to buying a copy of the book Starting Strength.

My job was crazy at the time and I discovered that exercise was an awesome stress-relief valve and I’ve been lifting ever since.

Here is a brief history of the monthly gym dues I’ve paid over the years: 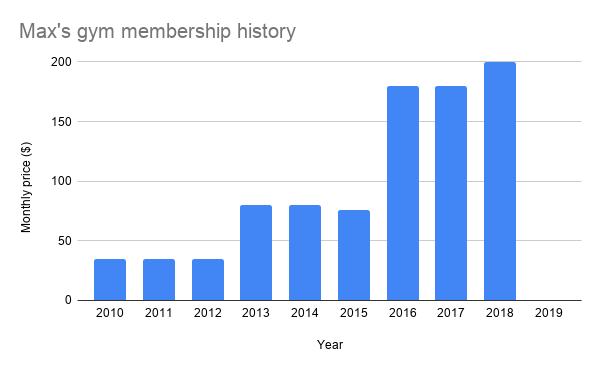 Knowing that, I estimated what the cost of building a home gym would be.

I came across the /r/Homegym subreddit in estimating thise costs–besides having great advice it has a bunch of photos people share of their home gyms to provide inspiration.

There are risks to consider before proceeding with how to build a home gym:

It’s reassuring to know that there is an active secondary market for gym equipment. You can sell off all of your equipment in the case of any of these situations.

Think of buying a gym membership as insurance against these 3 risks.

It’s a great resource, they have got a great Wiki.

I already knew what I wanted to buy, but jt gave me a sense for pricing and quality of equipment brands.

My first purchases were off of Craigslist, where I found a single listing that included:

All-in it cost $120. Next step was picking up more plates.

I found a second Craigslist listing where a local gym was liquidating their steel plates as they were replacing them all with bumper plates. I think they charged a flat $1/lb:

With this setup, I could squat, bench and deadlift up to 535lbs (something I have never done yet in any single lift).

I’ve bought/sold a few items here, none of which were gym equipment.

I would recommend checking it out, however you will likely get sidetracked browsing products unrelated to your home gym!

If you don’t want to destroy your plates or your garage floor you will need special flooring.

Based on recommendations in /r/HomeGym, I visited my local Tractor Supply Co to buy these: 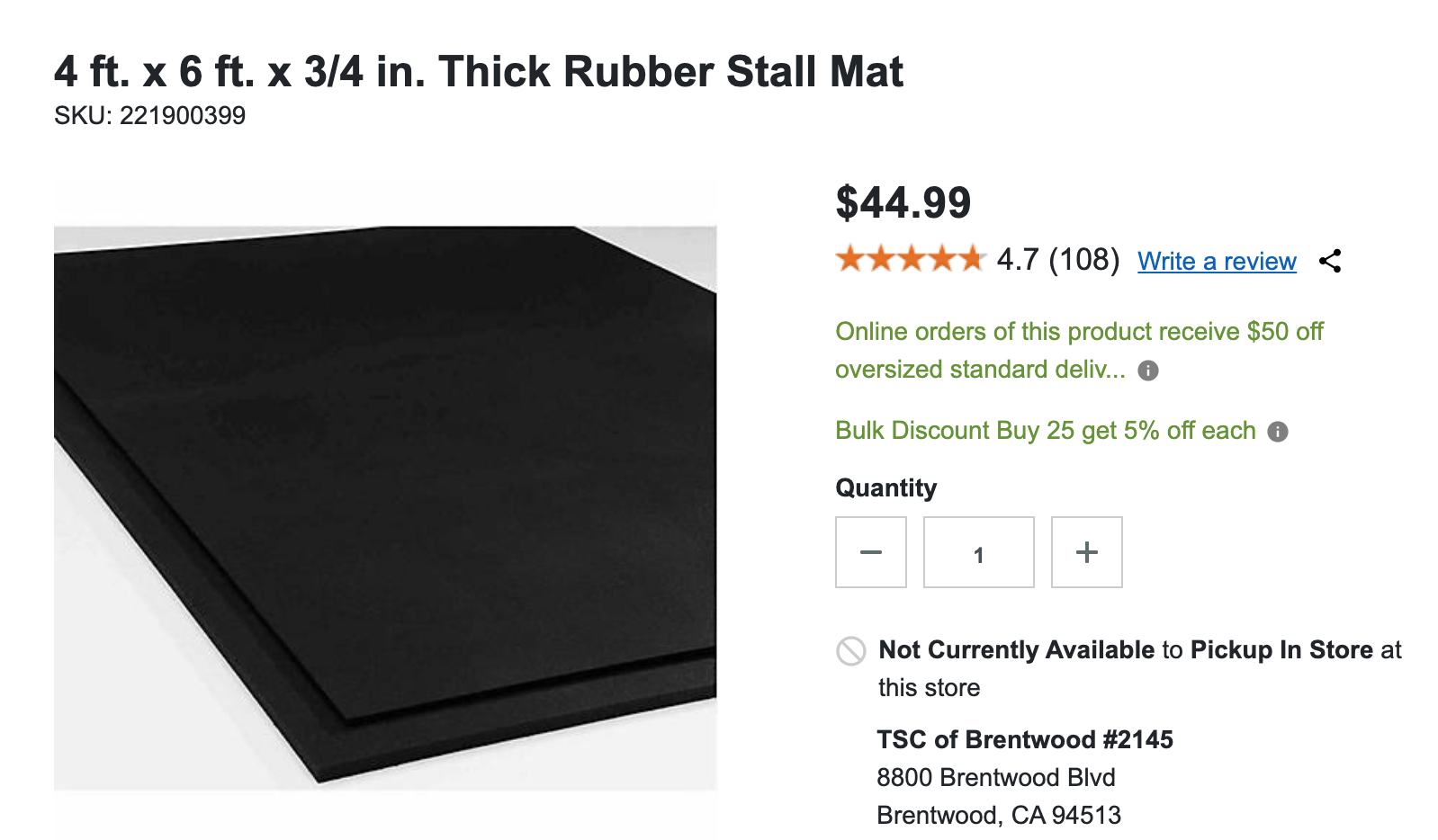 The store helpfully rolled them up for me and fit all 4 into the rear of our Prius with the back seats folded down.

When we first bought them they smelled awful of an odd plastic smell, but within a week or two the scent had gone away.

In Soquel, California, my girlfriend and I were walking around the neighborhood and saw a used sports supply company. 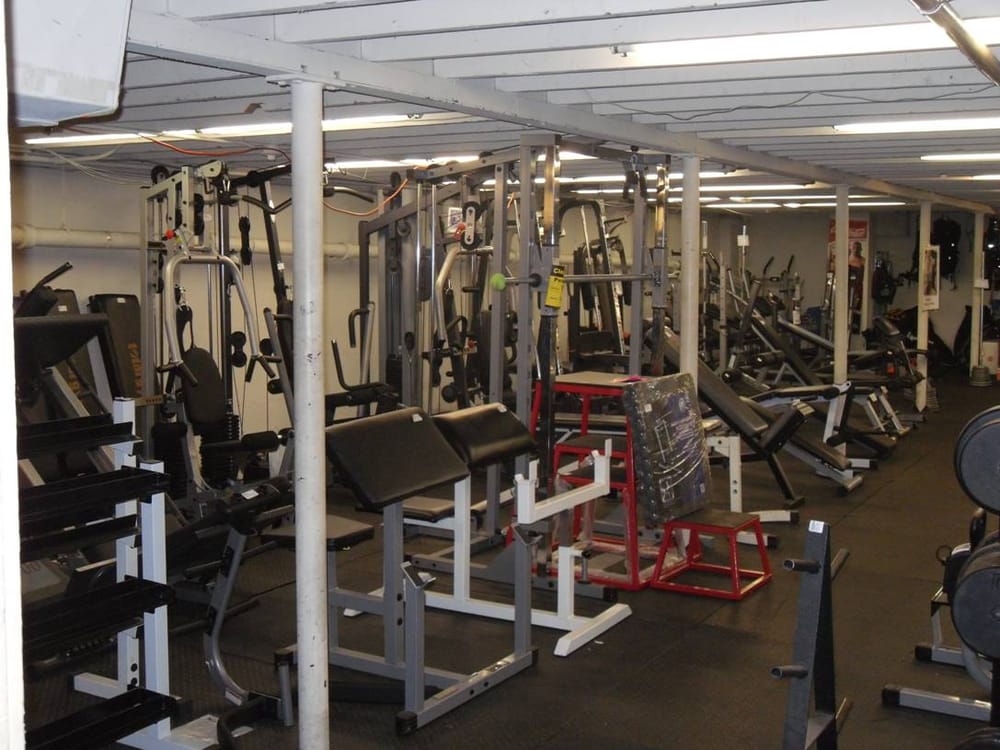 Their basement had a large selection of new and used barbell plates, priced reasonably at $0.60/lb so I picked up:

I made the foolish mistake of buying a pair of cheap 5lb plates off of Amazon.

I discovered after they arrived that they weighed significatnly different than advertised (or relative to each other).

I didn’t return them (which I now regret). Don’t make my mistake–do not put up with being sold garbage!

As I got interested in olympic weightlifting I went ahead and bought bumper plates directly from RogueFitness.com:

They shipped them direct to our house, but it took a while and one 20kg plate was missing from the first shipment so I had to call Rogue support to send another one (for free).

Here’s a screenshot of the two orders I placed with Rogue through their website: 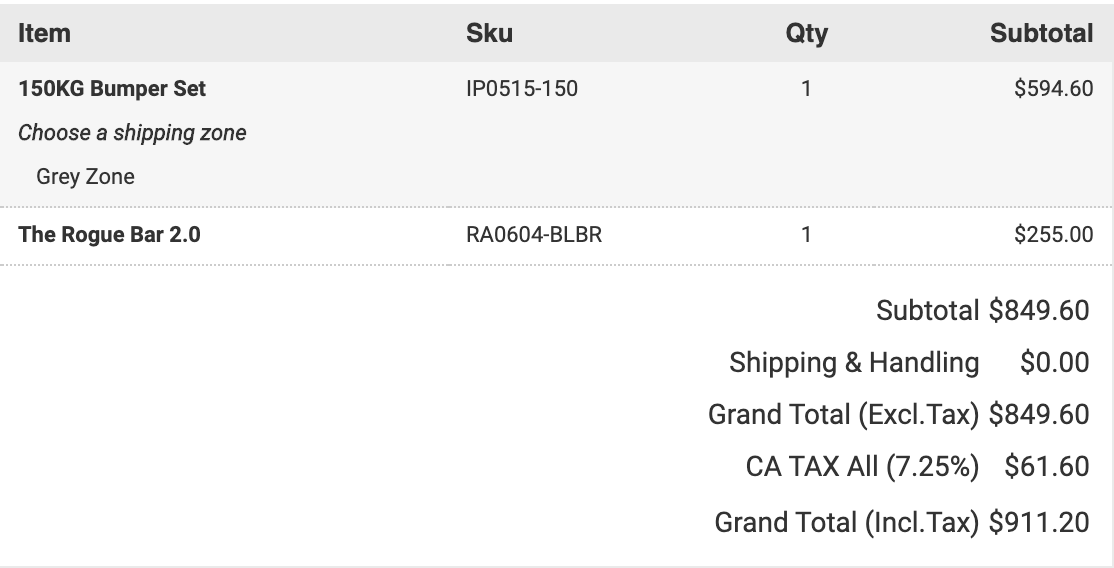 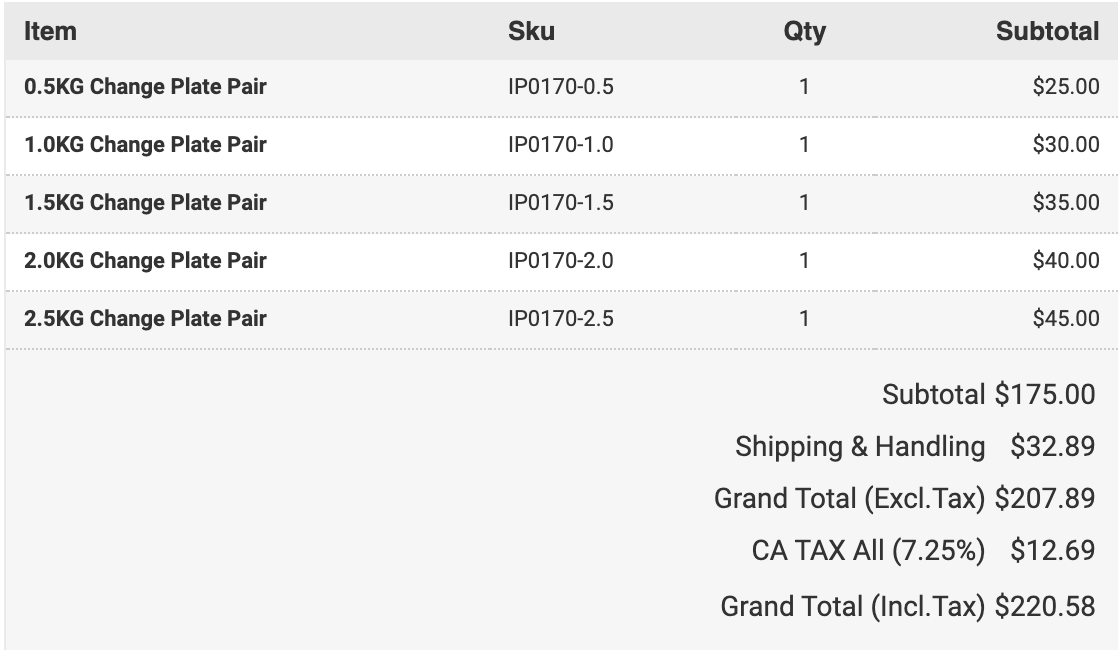 If I could go back in time, I would buy precision-milled cast iron plates for the reason that they are:

Note this link has a ton of affiliate links, but it is what ultimately persuaded me of what I should have bought: